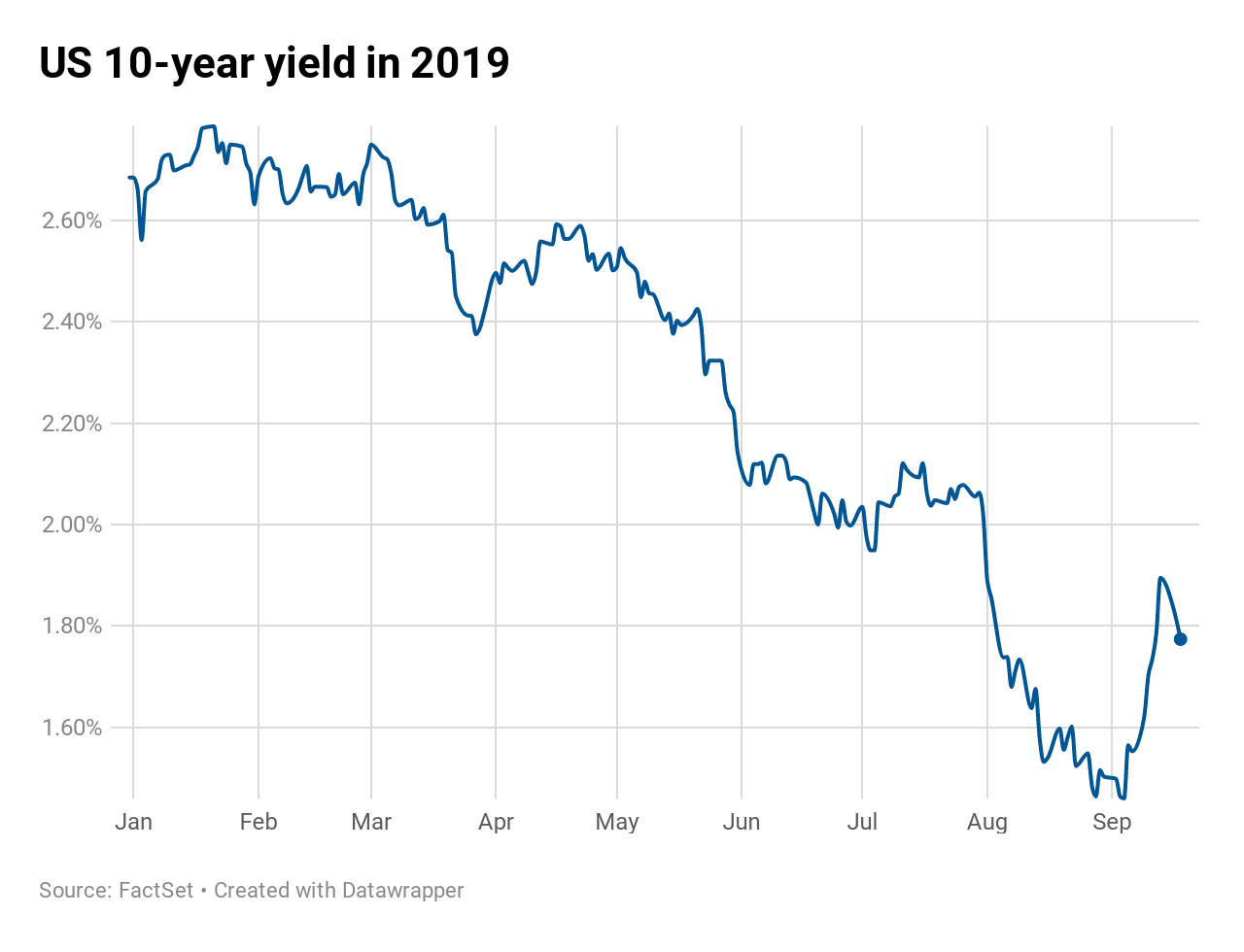 U.S. government debt yields fell Wednesday ahead of what investors across Wall Street expected will be the Federal Reserve’s second move to cut interest rates in 2019.

Fixed income investors are all but certain the central bank will cut its short-term lending rate by one quarter point to a range between 1.75% and 2% at the conclusion of its sixth scheduled meeting of the year. Of greater importance, however, will be how the Fed describes the state of the U.S. economy and its forecast for growth in the months to come.

The Fed’s decision is scheduled for release at 2 p.m. ET and Chairman Jerome Powell is expected to offer comments and answer questions in a press conference at 2:30 p.m.

The U.S. central bank on July 31 cut rates for the first time since December 2008 with those in favor citing slower economic activity, “muted inflation” and tensions between the world’s largest trading partners.

But while Powell categorized the midsummer cut as a mere “midcycle adjustment” based on a comparatively healthy domestic economy, the U.S.-China trade war worsened almost as soon as the Fed announced the cut. President Donald Trump on Aug. 1, one day later, announced that the U.S. would extend tariffs to practically all Chinese imports and scolded Beijing for reneging on promises to buy American crops and stem the sale of Fentanyl.

The president’s proclamation — as well as the Fed’s hesitation to guarantee additional rate cuts — roiled financial markets and sent investors fleeing for the safety of U.S. debt, a trend that would continue for the entire month. Demand for long-term, positive yield proved so high that the yield on the benchmark 10-year note fell more than 50 basis points in August, bottoming at a 3-year low of 1.43% on Sept. 3.

Inflation also remains a tricky issue for Fed officials, who seek to both maximize employment and keep prices stable. While the labor market remains strong with an unemployment rate of 3.7% near historic lows, the inflation outlook looks muddled.

The Labor Department’s report on August prices showed that U.S. consumer prices rose slowly in August, dampened by weak energy prices that weighed down an otherwise firm uptick. An attack on Saudi Arabia’s oil processing facilities over the weekend could obscure the inflation picture even further.

The consumer price index, which measures the costs Americans pay for items ranging from light bulbs to lawn mowers, inched up 0.1% between July and August. Core prices, which exclude volatile energy and food components, rose 2.4% from a year earlier, the fastest annual pace since 2008.