“The big thing for me is, I got my mom to come,” the CEO told the audience at Fortune’s recent Brainstorm Tech conference in Aspen. “She got to ring the bell to open our shares for trading.”

The ceremonious milestone inside the New York Stock Exchange was more than a financial event for Slack. It was a bar mitzvah of sorts: a step from adolescence to adulthood for the buzzy tool that lets workers message one another, share and collaborate on documents, and manage projects, among other tasks that are key to getting work done.

Slack had ample reason to grow up. Initially popular with Silicon Valley startups, the company has more recently attracted larger corporate customers, many of which are accustomed to working with vendors that are equally big—and public. “It gives us some credibility,” Butterfield said about Slack becoming a publicly traded company, during his onstage interview.

According to the CEO, some of Slack’s bigger customers had been asking for the company’s financial records. Now they’ll have access to details like revenue and profit—and risks to the business—on a quarterly basis.

To be sure, customers weren’t the only ones clamoring for Slack to go public. So were its early private investors, who have so far made a killing on the company. On June 20, Slack’s impressive first day as a publicly listed company, shares opened at $38.50, 48% above the reference price of $26 that had been set by the NYSE the day before. That gave Slack a valuation of about $20 billion, nearly tripling its value as a private company. The stock has since fluctuated, with Slack’s market cap dipping to around $15 billion in early August.

“It gives us some credibility.” —Slack CEO Stewart Butterfield on his company’s recent high-profile public listing

Despite the success of its “direct listing”—an unconventional method of going public without issuing new shares or working with an underwriter—Slack now faces even higher expectations of growth and the same powerful nemesis: Microsoft. The tech giant, based in Redmond, Wash., recently bragged that its rival workplace chat service, Microsoft Teams, now has 13 million daily active users, compared with Slack’s 10 million. The news sent Slack’s shares tumbling almost 4% in one day.

Butterfield’s response to the competition is that a smaller, more focused company can have an advantage over a larger incumbent that has dozens of products. The bigger you get, says Butterfield, the harder it is to emphasize quality and user experience.

Comparing Microsoft’s numbers with Slack’s is difficult for several reasons. For starters, Slack contends that its service isn’t just another chat tool for businesses. Rather, it’s in a category by itself, the company says, because it shifts communication from one-to-one, like email, which creates silos of information, to group “channels” that make sharing information and working together easy. The average user, according to Slack, keeps the app open for nine hours daily on her computer or mobile phone, and engages with it for about 90 minutes.

There is another reason that makes apples-to-apples comparisons tricky. Teams is bundled with Office 365, a subscription-based version of Microsoft’s key workplace applications. An employer can have Teams, in other words, without even knowing it, much less using it. Slack, on the other hand, is sold as a stand-alone service and is not folded in with other products. Critics say that Microsoft’s user numbers for Teams are therefore inflated.

But Jared Spataro, corporate vice president of Microsoft’s 365 division, says these questions about bundling are exactly why the company decided to publish its number of daily active users—not just overall customers. “The 13 million people who are using Teams— from our perspective, it doesn’t matter if they got it bundled or free,” says Spataro. “They’re using the product.”

The number of hours that Microsoft’s customers spend on Teams daily is unclear, however. Unlike Slack, Microsoft wouldn’t say. 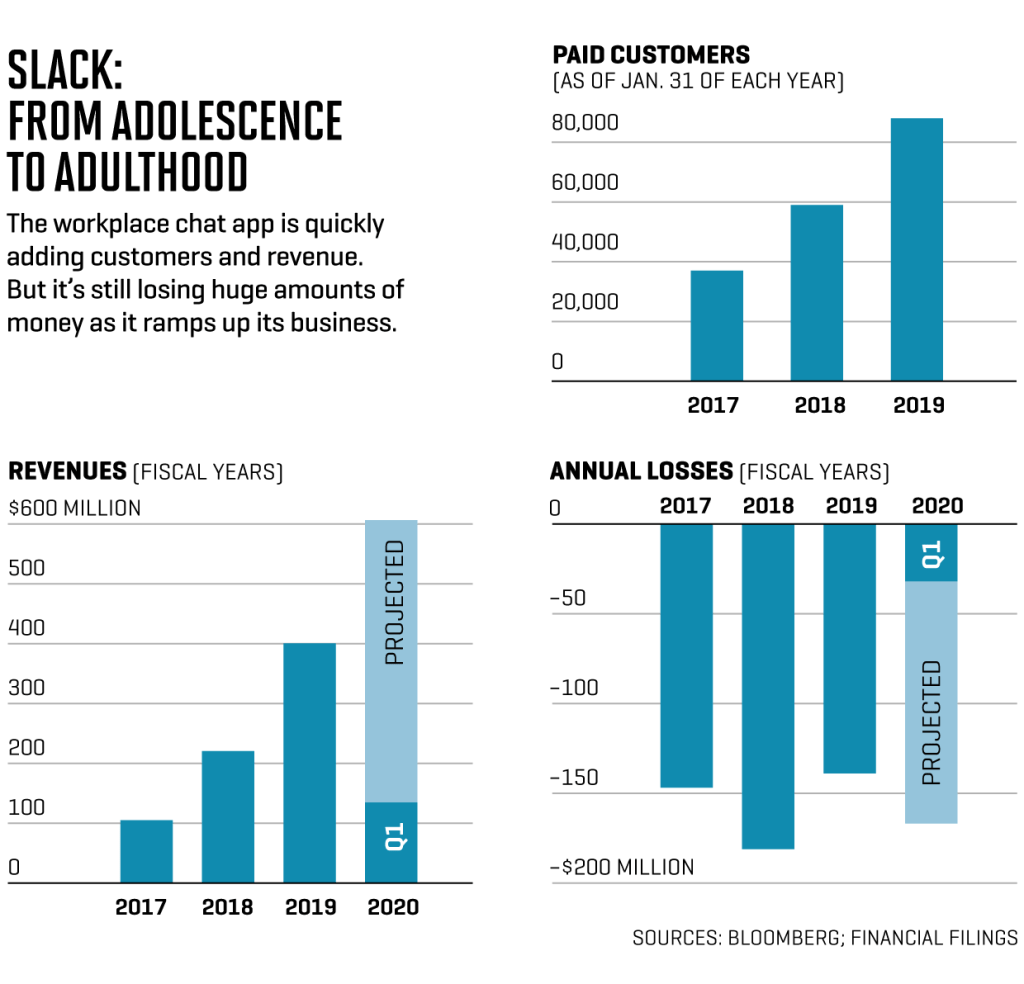 In any case, analysts agree that Teams is the greatest threat to Slack. William Blair analyst Bhavan Suri states the obvious in a recent report: “Microsoft is well-capitalized and has a significant presence in many large enterprises.”

While Microsoft is a highly profitable machine that can easily plow cash into improving and promoting Teams, Slack is losing money. It hemorrhaged $139 million in its latest fiscal year on $400 million in revenue. But here’s the good news for Slack: Its roster of paying customers was up nearly 50% during that period compared with the year before, a growth rate that many other enterprise tech players, large and small, would envy. That kind of momentum is Slack’s ticket to achieving profitability, assuming it can continue at a similar pace.

Slack’s trajectory hasn’t always been so clear. Butterfield, 46, started Tiny Speck, a maker of online games, in San Francisco in 2009. He pivoted to Slack, the chat tool his team had created to communicate internally, in 2014, when it became clear that the original game idea wouldn’t catch on. The Canadian-born chief executive officer now splits his time between the San Francisco Bay Area and New York City, along with Slack’s other major hubs and visits to its customers, who are located across 150 countries.

It’s not Butterfield’s first time in the spotlight. Previously, he cofounded photo-sharing site Flickr, a hot startup during the post–­Internet bubble era. Yahoo eventually bought the service in 2005 for a reported $35 million (a respectable “exit” at the time). Butterfield stayed on at Yahoo as general manager of Flickr, but he left three years later, disenchanted with the web portal’s bureaucracy, lack of innovation, and huge size.

It’s no surprise, then, that despite Slack’s rapid growth and its transition from private to public, Butterfield remains convinced that being bigger isn’t always better. His customers tend to agree.

“Slack is a very nimble company,” says Vijay Sankaran, chief information officer at financial services firm TD Ameritrade, where 11,000 employees have access to the chat app. “We’ve got a direct relationship with the CEO. We work with the product engineering team. That’s a real strength of theirs.”

Kaitlin Norris, “culture strategist” at e-­commerce company Shopify, another customer, says she has asked for—and received—specific new features from Slack for her company’s 4,000 workers. She is currently waiting for Butterfield’s crew to create a feature that would let employees manually organize channels, tabs created for specific projects or topics, which otherwise appear in alphabetical order on the service. 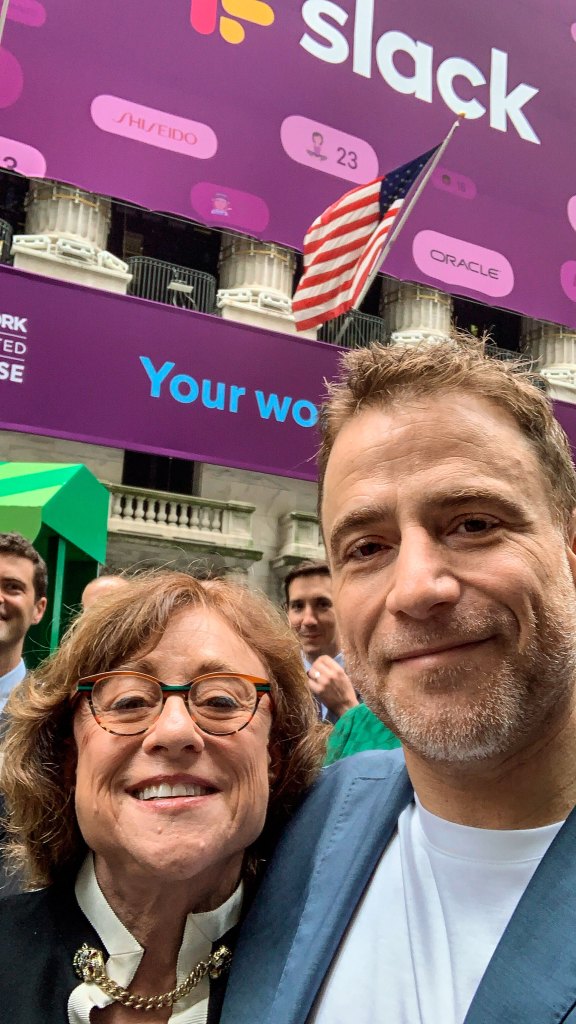 Much of Slack’s appeal to customers is that it integrates with online services from other companies. There are more than 1,500 such apps on the platform, from videoconferencing service Zoom to Google Drive, the online storage service that enables users to collaborate on documents. And Slack offers its customers tools that let them easily develop their own features that can be tied into Slack. Shopify, for example, has created an artificial intelligence–based bot called Tally that tracks what employees spend and allows them to file their expense reports, all within Slack.

“Slack acts like a pseudo operating system for the modern enterprise” that lets businesses access all their apps in one place, writes Suri, the William Blair analyst.

If becoming the one-stop shop for corporate software sounds a lot like Microsoft’s pitch, it is and it isn’t. Ironically, for Slack to succeed, at least in the eyes of Wall Street, it will need to become an enterprise giant much like its rival. But Butterfield is convinced he can continue to push the company into adulthood without forgetting its roots—the simplicity that helped Slack catch on in the first place.

A version of this article appears in the September 2019 issue of Fortune with the headline “Slack Spreads Its Wings.”

—The economy is in code yellow for a recession based on these 9 metrics
—The death of trading: Why more big banks think the business is a losing bet
—Recession watch: 3 ways to reframe your thinking about the next downturn
—What are negative interest rates and why is everybody so worried about them?
—Why WeWork won’t be in the S&P 500 after its IPO
Don’t miss the daily Term Sheet, Fortune’s newsletter on deals and dealmakers.