Latest News
Home /From the Civil Rights Era to Hong Kong: How Airports Became a Global Symbol of Protest

Terminals of major airports are often stale and clinical. They usually show few signs of local culture and flavor, with an environment that feels wholly apart from the vibrant metropolises they serve. But then there are times when protesters descend, and they become exhibitions of a nation’s deep political divisions on full, raw display.

That’s precisely what played out in Hong Kong last week, as scores of demonstrators swarmed the world’s second-busiest air transport hub, staging protests so disruptive they forced the cancellation of flights on two consecutive days.

The Hong Kong protesters’ choice of venue was, of course, strategic.

“It is an excellent platform to reach out globally,” says Wong Ka Ying, an official from the Hong Kong Artist Union, which actively campaigned at Hong Kong International earlier this month. The demonstrators, who are vying for more freedoms, were not the first to make such a determination. Indeed, the actions in Hong Kong were the latest chapter in a tradition of airport protests that’s closely paralleled the democratization of flight.

From Greenville to Hong Kong

In the 1950s and 60s, as commercial flying grew in popularity, airports became a backdrop of the U.S. civil rights movement. Though perceived as outposts of a national aviation system, some airports in the South remained segregated even as airports in the North desegregated, says Christopher Schaberg, the author of three books on airports, and a professor at Loyola University in New Orleans. 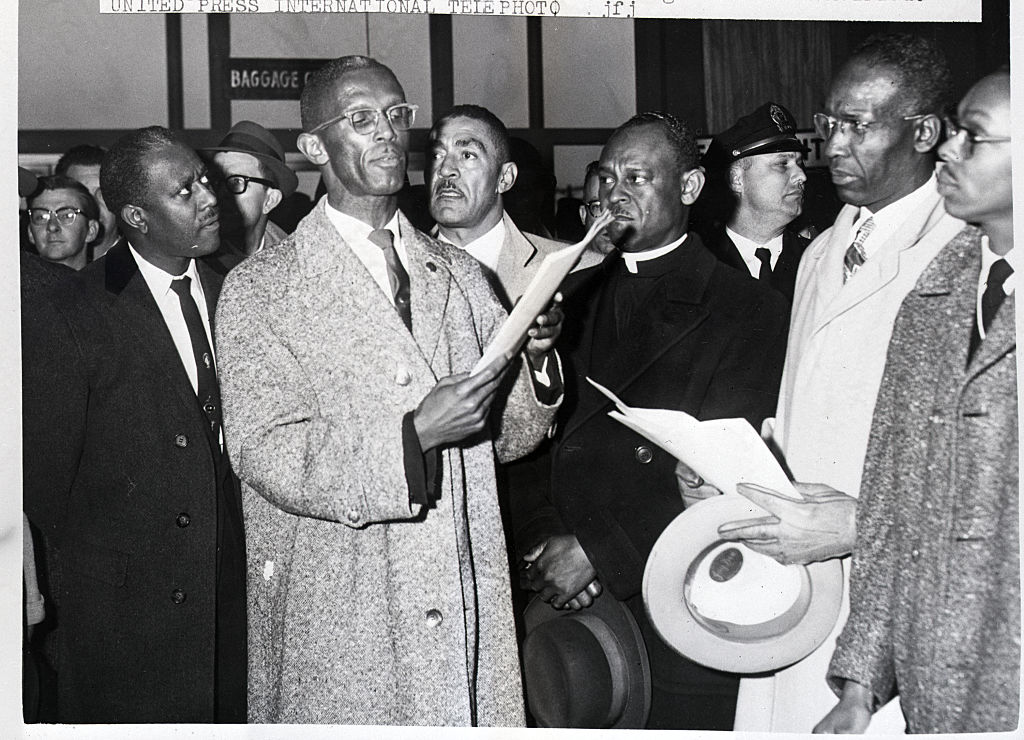 In 1959, former baseball player Jackie Robinson ignited protests after he and his companions refused to move from the main lounge to a segregated one at the Greenville, South Carolina airport. They’d visited the city to speak at an NAACP convention. Their defiance inspired a 1,000-strong march to the airport on New Year’s Day 1960 that called for an end to segregation.

Despite that early instance, protests at airports are mostly a phenomenon of the last 20 years, when air travel has ballooned, says Schaberg. Between 1999 and 2018, the last year figures are available, the number of passenger trips rose by about 156% to a record 4.1 billion, according to data from the International Civil Aviation Organization, the UN’s aviation body.

“[W]e needed a critical mass of global travel for [protests at airports] to be as effective as they are now,” he says.

With so many international visitors now streaming through terminals, airports provide a near-unparalleled venue for protest messaging.

“[It] allows you to communicate who you are to other audiences that are very generalized,” says Brian Doherty, a professor of political sociology at Keele University in the U.K.

For global attention, there’s not much that can compare with Hong Kong International.

Last year, it attracted 75.3 million passengers, and was the world’s biggest air cargo hub, with more than 5 million metric tons cleared through its terminals, according to data from Airports Council International. Nearly 1,000 flights were canceled during the five consecutive days of protest through August 13. The disruption is likely to have caused the local aviation industry more than HK$600 million ($76.48 million), experts told the Hong Kong-based South China Morning Post. 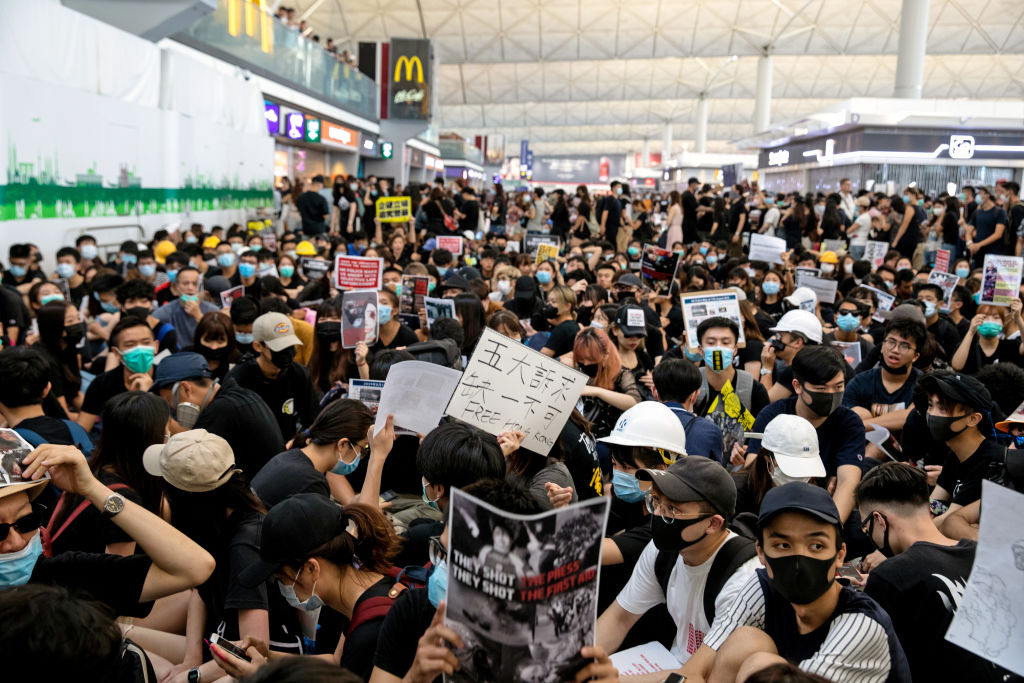 Demonstrators gather during a protest at the Hong Kong International Airport in Hong Kong on Aug. 12. (Kyle Lam—Bloomberg via Getty Images)

Beyond visibility, protesters see airports as “a de facto safer space,” Schaberg says. “You’re not going to have immediate political and military involvement,” he says. A street, on the other hand, “can be mortared or gassed, and be cleaned up the next day.”

Taking those factors into account, it’s easy to see why protesters around the world—despite their different grievances and constituencies—are ending up in the same place.

In February, protesters demanding the resignation of Haiti President Jovenel Moïse blocked access to the airport in Port-au-Prince, stranding hundreds of tourists.

In early 2017, tens of thousands of protests descended on airports in the U.S. for largely spontaneous, mass demonstrations against the Trump administration’s executive order preventing travelers from seven majority-Muslim countries from entering the country. 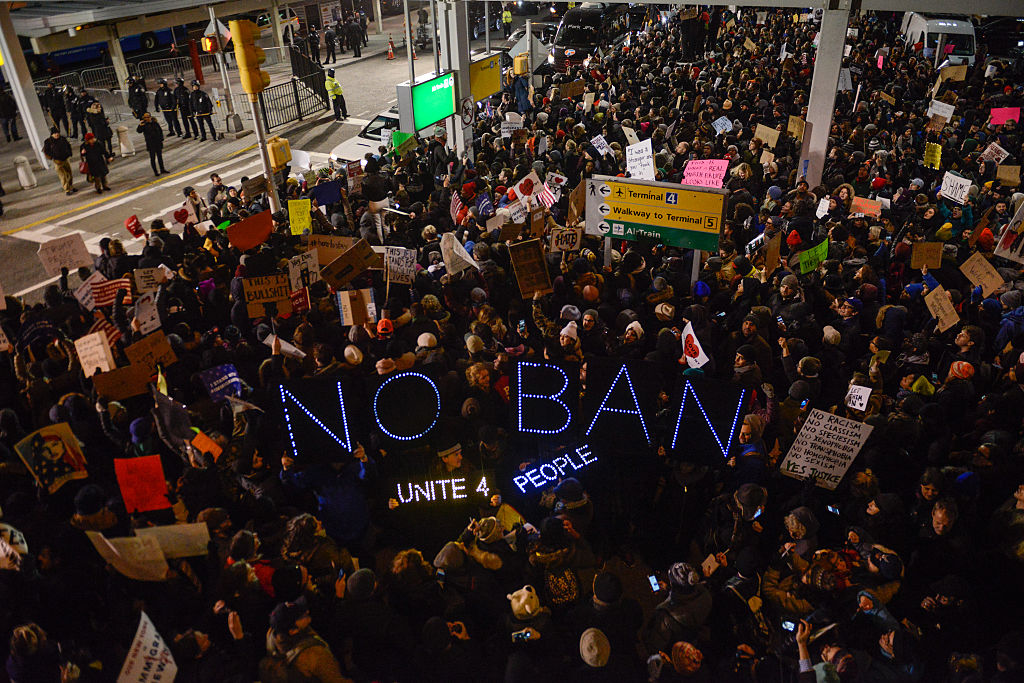 Other protests have brought major U.K. airports to a standstill, including protests by Black Lives Matter in September 2016 at London City Airport and environmental campaigners Plane Stupid in July 2015 at London’s Heathrow Airport.

But the airport venue does come with a downside. Because they’re usually privately-owned space, with many areas under tight security, there’s also a limit to how far into an airport protests can penetrate, Schaberg says.

In response to the protests, Hong Kong International Airport obtained an interim injunction to prevent people from “unlawfully and willfully obstructing or interfering with the proper use of HKIA,” which drew to an end to the demonstrations.

Despite their culmination, the Hong Kong airport protest seemed to take the city’s pro-Democracy movement to a new level, as news of disruption and flight cancellations zipped around the globe.

In that sense, the episode fits into how Schaberg sees the airport protest trend broadly: as mostly effective. “They dramatically interrupt what we think airports are for,” he says; utilitarian centers of transport and commerce with a population that’s never there for very long.

—Vietnamese egg coffee is taking North America by storm–but what is it?
—Energy company earnings suffer in the gas glut era
—The U.S.-China trade war is forcing prunes to rebrand as a superfood
—The currency that’s quietly emerged as Asia’s safest bet
—Listen to our audio briefing, Fortune 500 Daily
Catch up with Data Sheet, Fortune’s daily digest on the business of tech.

Afghanistan: What happens when ISIS…

US and Afghan Taliban to…