Investors clamored into the safety of U.S. government bonds, sending the 30-year Treasury bond yield below 2% for the first time ever. 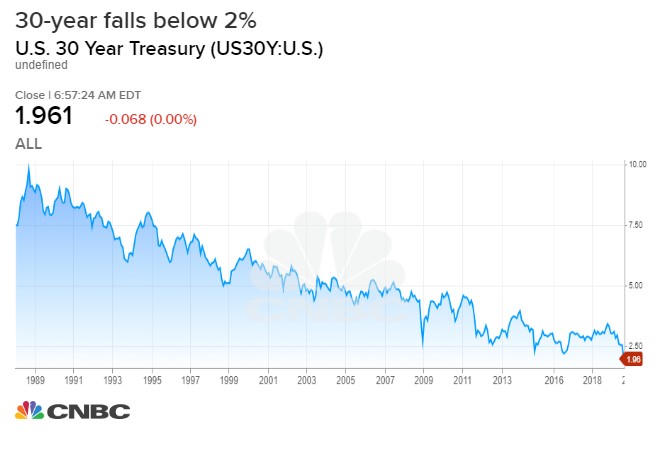 The historic drop in long-term U.S. bond yields comes shortly after interest rates on the closely watched 10-year and 2-year Treasurys inverted. The inversion of this key part of the yield curve has previously been a reliable indicator of economic recessions.

“The yield curve inverted which created a temporary ‘pile on’ effect in the bond markets,” wrote Tom Essaye of The Sevens Report. “We have absolutely not seen what we wanted to out of the Fed. We had hoped for a rally in the 10-year yield and a widening of the 10s-2s spread. The exact opposite has occurred, and at this point currency and bond markets are no longer flashing ‘caution’ signs on the U.S.-global economy and risk assets, they are flashing a ‘warning’ sign —loudly.”

That part of the curve was positively sloping again on Thursday but only slightly.

The stock market took a huge hit in the previous session, with the Dow plunging 800 points in its worst decline of the year and fourth-largest point drop ever to a two-month low. The sell-off exacerbated an extensive flight-to-safety into government securities.

Markets were further shaken early Thursday after China said it has to take necessary countermeasures to the latest U.S. tariffs on $300 billion of Chinese goods. The ministry also said the U.S. tariffs violate a consensus reached by leaders of two countries and get off the right track of resolving disputes via negotiation.

At times of market turbulence, investors tend to flee to assets expected to either retain or increase in value — such as gold, the Japanese yen and government bonds. These safe-haven assets are typically sought to limit one’s exposure to losses in the event of a sharp market downturn.

It comes at a time when market participants are worried about a protracted U.S.-China trade war, geopolitical tensions and uncertainty over Brexit. Economic data in China and Germany this week also suggested a faltering global economy.

Stateside, investors are likely to closely monitor U.S. retail sales data for July at around 8:30 a.m. ET. The figures are thought to serve as an indicator of the strength of the world’s largest economy.

The latest weekly jobless claims, industrial production data for July and business inventories for June are among some of the other data releases set to follow slightly later in the session.