Stephen Curry saw Kevin Durant’s layup attempt bounce off back iron and, eager to save it, soared over Clippers guard Patrick Beverley for the tip-in dunk.

By the time Curry got to the rim, the ball was falling through the net. No matter. In that third-quarter leap, Curry showed just how willing he was to push the limits of his improvisation. On Saturday night, with the playoffs finally here and his right ankle healed, Curry — hardly known for his dunking ability — could do little wrong as he broke Ray Allen’s record for career playoff 3-pointers (385).

In the Warriors’ 121-104 win over the Clippers in Game 1 of the first round, Curry dazzled a capacity Oracle Arena crowd with dribbling displays, deep 3-pointers, pinpoint passes and vicious rebounds — yes, rebounds. Afterward, Los Angeles head coach Doc Rivers was desperate for answers, saying, “Curry has destroyed us all year. He really has. We have to do a better job.”

The good news for the Clippers: They can’t do much worse. In three regular-season games against Los Angeles, Curry averaged 32.3 points on 54.1 percent shooting. On Saturday, with rookie Shai Gilgeous-Alexander serving as his primary defender, Curry posted 38 points on 11-for-16 shooting (8-for-12 from 3-point range), seven assists and a playoff career-high 15 rebounds. 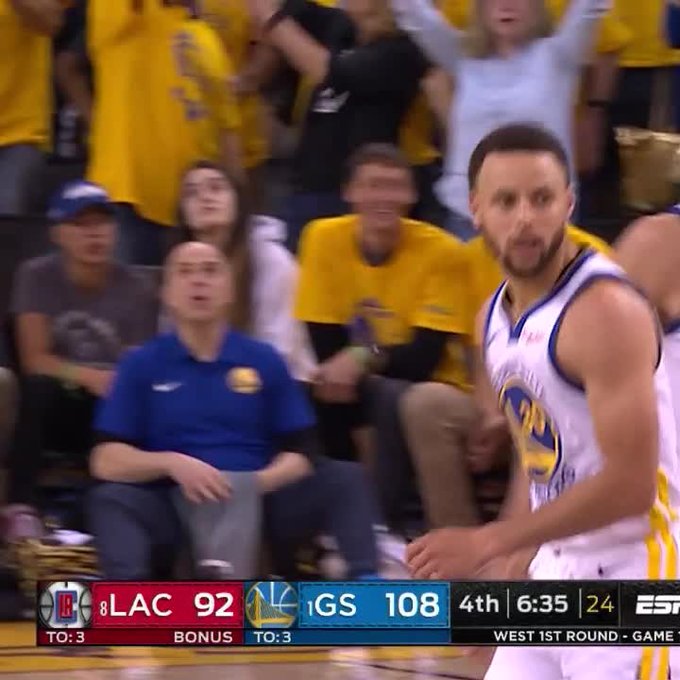 Steph put on an absolute SHOW to give the Warriors a 1-0 series lead.

Curry’s sound defense was a big reason Beverley, long one of his biggest nemeses, totaled just three points on 1-for-6 shooting in 31 minutes. The MVP chants started late in the first quarter and returned whenever Curry stepped to the foul line. After a regular season loaded with adversity, the Warriors could feel at ease knowing that Curry showed no signs of lingering ankle pain.

Because even after Curry punted a basketball with his right foot at practice Friday, few could blame coaches if they were nervous. That balky right ankle has been the source of many scares over the past decade. But there Curry was Saturday, delivering the type of highlight package only he can provide.

Content to focus on facilitating in the first quarter, he saw his cue to get more aggressive with the game tied at 51-51 late in the second. Over the final 3:28 of the first half, Curry scored 13 points during an 18-5 run, propelling his team to a 13-point lead at the break.

In the third quarter, Curry seemed to make a momentum-shifting shot whenever the Clippers started to mount a rally. After corralling an offensive rebound early in that period, he stepped to the right wing, laced a dribble through his legs and drained a 3-pointer over his defender’s outstretched hand. Late in the third, Curry crossed mid-court, stopped 7 feet behind the arc and, while drawing contact and falling to the floor, hit the heave.

This was nothing unusual for Curry, who has made a habit of the remarkable. But just four days after he rolled his right ankle in a win over the Pelicans, Curry had assuaged any lingering concerns, uncorking one of his most mesmerizing performances just as the stakes heightened.

During a timeout midway through the fourth quarter, Curry appeared on the big screen as the PA announcer proclaimed his latest feat: With eight 3-pointers against the Clippers, he had eclipsed Allen’s all-time postseason mark of 385.

How Athletes Are Planning on…

Will Tim Tebow make the…

NFL Draft could get shaken…