plan to add thousands of jobs in Austin, Texas, San Diego, Seattle and Culver City, Calif., draws a road map of its transformation away from its identity as an iPhone maker toward a future reliant on services and higher-priced devices.

Each location where it announced expansion plans Thursday reflects a different facet of Apple’s evolving model. Culver City gives Apple a Hollywood homebase as it pushes into video programming. Seattle is a machine-learning hub where it can develop algorithms that personalize streaming-music playlists and improve Siri. San Diego and Austin offer semiconductor engineers who can advance the customized-chip efforts that help Apple wring more money out of its iPhones, iPads and Macs.

The mix of software and services and higher prices are key to Apple’s effort to offset slowing iPhone unit sales. Though the company reported record annual revenue on Nov. 1 due to higher iPhone prices, it also said it would stop reporting the number of iPhones sold—a metric that has been stagnant lately—a decision that many analysts interpreted as signaling the iPhone’s growth years are in the past. Apple’s stock price has declined by nearly a quarter since then.

While the push beyond its Silicon Valley home could aid those efforts, it also will test a highly centralized company that has thrived due to a concentrated workforce located near its Cupertino, Calif., headquarters, analysts said.

Apple said it will build a new campus in Austin, Texas, and plans to expand and open new sites around the U.S. Here’s highlights: 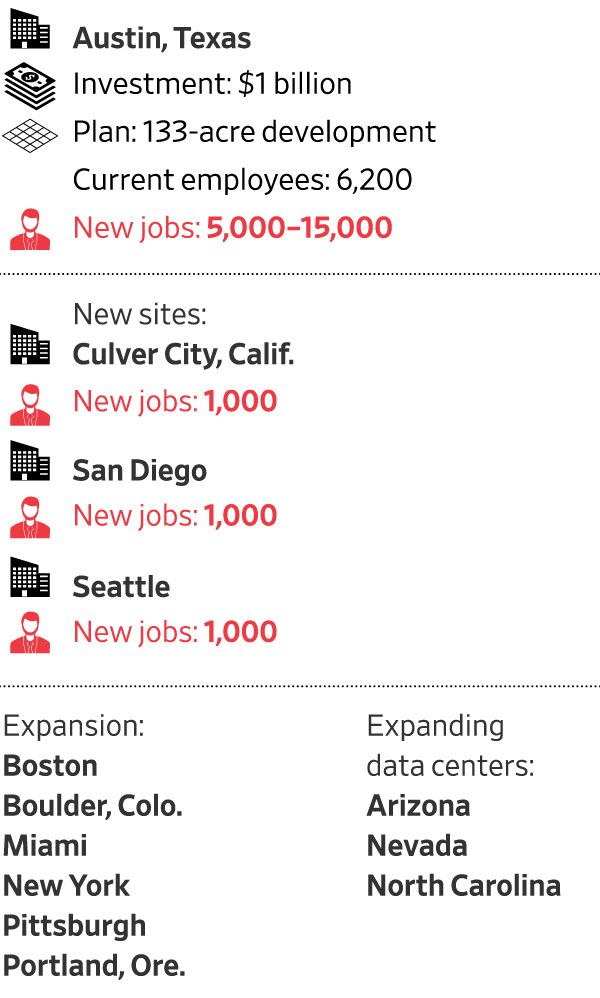 “This idea of ‘Designed in Cupertino’ has really been the ethos of Apple, and now you’re going to have AI and services designed outside Cupertino,” said Gene Munster, managing partner at investment and research firm Loup Ventures. “It’s a shift that adds complexity to the culture.”

Co-founder Steve Jobs wanted as many employees near headquarters as possible to speed decision making and foster a strong culture. He inspired Apple’s new $5 billion campus with its 2.8-million-square-foot circular building, believing that bringing Apple’s diffused staff under one roof would improve the exchange of ideas. Apple’s workforce has exploded to about 132,000 employees from 16,000 before the iPhone’s debut.

Carolina Milanesi, a technology analyst with Creative Strategies, said she has visited Apple offices in London and Beijing and found they feel like headquarters. She expects offices from San Diego to Seattle will be the same way. “It might be you don’t get the Silicon Valley vibe,” Ms. Milanesi said. But she said, “It’s a culture thing and not a location issue.”

As a company focused on selling devices, Apple over the past decade created millions of low-end manufacturing jobs in China at the contractors who assemble its gadgets. While such assembly jobs aren’t likely to return to the U.S., Apple has increasingly emphasized adding other types of workers at home.

On Thursday, Apple said it would add 1,000 jobs apiece in Culver City, Seattle and San Diego. It will invest $1 billion in a new Austin campus for 5,000 employees—its second there.

Apple reached a market value of $1 trillion in early August, propelled by the sustained success of the iPhone. WSJ’s Spencer Jakab takes a look at how Apple got here. Photo illustration: Heather Seidel/The Wall Street Journal

Culver City is expected to be the base of a Hollywood operation to which Apple last year allocated an initial $1 billion for developing programming and poaching top talent. In January, the company leased 128,000 square feet of office and retail space in the Los Angeles-area town, which is home to Sony Pictures Entertainment and its Culver Studios, where classics like “Citizen Kane” and “Gone With the Wind” were made.

The additions in Seattle promise to deepen Apple’s presence in a hub for machine learning, a type of artificial intelligence.

“The two layers of the cake that are ubiquitously important for all apps and services are cloud computing and data science,” Mr. McIlwain said. “Apple’s got to come to terms with that.”

Traditionally, gadget makers like Apple have bought chips made by other companies. But in the past decade, Apple has expanded its semiconductor efforts to include the Bluetooth chip that powers AirPods and graphics processors for the iPhone. Its efforts helped enable the facial-recognition technology that it introduced with last year’s iPhones, a feature that helped justify raising the starting price of the iPhone X by more than 50% to $999.

Apple has added jobs in Austin, where it agreed to build its first campus in 2012, to support those efforts over time.

The San Diego area and Southern California, meanwhile, have been the hub for two of the key developers of communications chips:

Apple can poach engineering talent from those two companies and potentially push into their areas of expertise, developing its own modem and radio-frequency chips, said Robert Maire, president of Semiconductor Advisors, which advises on chip-related transactions.

“If you’re doing chip design, that would be the place to be,” Mr. Maire said of San Diego.

Developing a modem chip would also ease Apple’s dependency on Qualcomm, he said. Apple sued the chip supplier nearly two years ago over what it called unfair licensing practices, and has been in a bitter legal battle with the company since then.

Write to Tripp Mickle at Tripp.Mickle@wsj.com